What is Forensic Anthropology? 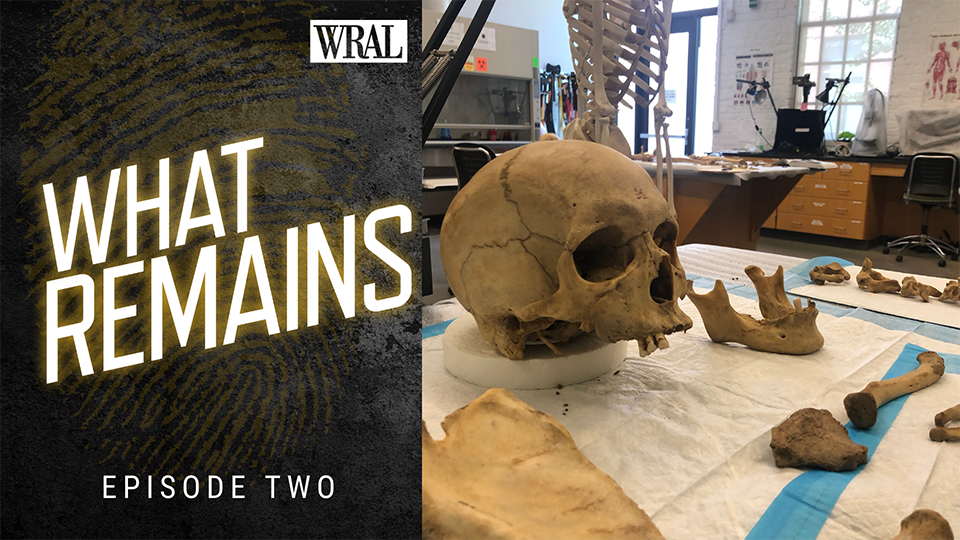 What is Forensic Anthropology? What Remains Podcast Episode 2

Forensic anthropology is the study of human remains – usually skeletal remains – to help with criminal investigations. If anyone can answer the question “What is forensic anthropology?” it’s Dr. Ann Ross. Entering her laboratory at North Carolina State University is like walking onto the set of a horror movie with skeletons laid out on metal tables. During our interview for the What Remains podcast, we sit across from one other with a skeleton between us. But pretty quickly her nonplussed, matter-of-fact demeanor rubs off on me, and I forget we’re talking across a table full of bones.

Immediately, I want to know what makes this woman tick. How did the daughter of a Chilean mother and a British father who grew up in Panama end up thousands of miles from home in an NC State anthropology lab that many people would see as the definition of macabre?

Listen to What Remains, Episode 2

She tells me her father wanted her to have a proper career, something in the business world. So, she studied accounting at Florida Atlantic University. Not only was she not good at it, but she was bored to tears. Senior year she took an anthropology class, and that’s when lightning struck. She stayed on to get another degree in forensic anthropology and then pursued graduate work.

And that’s when she met the first of many mentors who set her on a path to become a forensic scientist. Joseph Davis was Miami-Dade County’s Chief Medical Examiner from 1957 to 1996. Davis was a legend in this field. Hands down. He consulted on high-profile cases around the country including the assassinations of President John F. Kennedy and Martin Luther King. Davis had an unparalleled collection of bones for young budding forensic scientists to learn from. It lit a fire under Ross.

Then she moved on to the University of Tennessee for her doctoral studies – the home of the first human decomposition facility, also known as a body farm. It was created by the renowned anthropologist Dr. Willam Bass who would become another one of Ross’ mentors.

Learn more about The University of Tennessee Forensic Anthropology Center.

But it wasn’t just about learning forensic anthropology in an academic setting, Ross quickly took her skills outside the classroom. Her advisor asked her to go to Bosnia and help the government identify war victims. She was sent to the border of Bosnia and Croatia to a former concentration camp where the detainees had been killed and discarded--they were thrown down a well along with grenades that sealed their fate. Amidst very rustic conditions with rudimentary tools, it was Ross’ job to identify the remains. It was here in this intense environment that she developed important research about how to measure and analyze the remains of Eastern Europeans. It became the subject of her graduate dissertation and she later wrote about the epidemiology of genocide – research that is still used by other forensic scientists today.

Ross continues immersing herself in humanitarian efforts – volunteering around the world wherever she is needed. In 2008, she traveled to her mother’s native country, Chile, to assist the government in identifying the skeletal remains of torture victims from General Augusto Pinochet’s military dictatorship. It was in Chile that Ross learned how new technology, like advances in DNA science, could be used to identify older, fragmented, severely decomposed remains. This was a new frontier in forensic anthropology.

In addition to working in Chile and Bosnia, Ross is part of DMORT, the Federal Disaster Mortuary Operational Response Team. They respond to natural disasters and help to identify the dead. In 2005, she went to Louisiana in the aftermath of Hurricane Katrina. In 2010, Ross took her experience from Hurricane Katrina with her to Haiti to help identify earthquake victims there. Basically, Ross’ job was to take the remains that were found, identify the person if she could, and then help facilitate getting those remains to the person’s family.

Her Focus is the Work Itself

How does she do it? How does she separate the emotions from the science, the heart from the head? She tells me her mentors gave her some very important advice early on, to focus on the work, focus on the facts and use that to push these cases forward because that’s what the families of the victims need. In episode two of the What Remains podcast we discuss her work on the Laura Ackerson murder case. WRAL News covered the case and the subsequent trials of Grant Hayes and Laura Hayes. Find more on that case here.

Through all this, she is always very aware that behind the bones are real people who lived and breathed and walked the earth, people who were loved, people who are missed, and people who deserve to be identified and returned to their families. All she wants is to find the answers that might make this possible.